Construction of the Museum

In July 2004, the decision was reached to launch the most spectacular building project in the history of Dr. Ing. h.c. F. Porsche AG. The Viennese architects office Delugan Meissl Associated Architects were chosen from over 170 entries from all over Europe in the competition that was held to find a design for the museum. Actual construction began in October 2005. 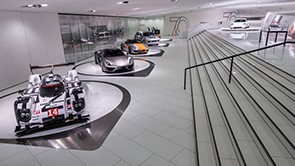 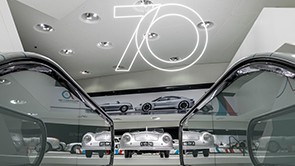 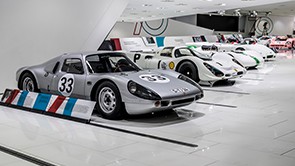 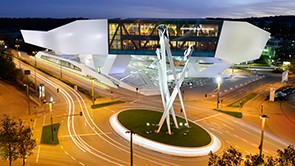 At the turn of the year 2006/07, the so-called basement and the core of the building were completed. By that point in time, about 21,000 cubic meters of concrete had been used for the underground garage, ground floor, second floor, and central support beams. The steel structure supporting the exhibition space, which spans 5,600 square meters, was successfully completed in the fall of 2007. The installation of building systems and the interior work began during the same season.

On December 2008, finally, the Museum was handed over to Porsche exactly on time. The opening of the Porsche Museum took place on Saturday 31 January 2009.

The building designed by Delugan Meissl is a bold statement. Supported on just three V-shaped columns, the museum’s dominant main structure seems to float above the ground like a monolith.

This bold and dynamic architecture reflects the company’s philosophy. It is designed to convey a sense of reception and approachability in order to welcome visitors in a friendly manner.

The building visibly translates the dynamic nature of the Porsche brand into architecture. From every angle, the shapes of the monolith and base building look different thanks to their polygonal, avant garde forms and the variation in the structures and windows. The glazed main façade of the 23 metre high museum adorned with the Porsche logo faces north, greeting those heading into the city centre by car. The architect has succeeded in creating an eye-catching complex that nevertheless blends well into its overall setting.

"The Porsche Museum creates a space that gives architectural expression to the company’s confident outlook and discerning standards, while also capturing Porsche’s dynamism. Knowledge, credibility and determination are as fundamental to the philosophy as courage, excitement, power and independence. Every idea is treated as an opportunity actively to tackle fresh challenges and probe the limits, yet still remain true to yourself. This museum endeavours to reflect all that," declares architect Delugan Meissl in his dedication.


The spread of Covid-19 presents us all with new challenges and everyone has to contribute to the protection of the population. The health of our guests and our employees is our top priority. We have further expanded our high hygiene standards. In this way, we are able to provide you with an all-round good and safe feeling during your stay in our hotel, even under the current conditions. When you arrive, your room is freshly cleaned, ventilated and thoroughly disinfected. All decorative items have been removed. In public areas, all high-touch surfaces are cleaned and disinfected several times a day. Unfortunately, we are unable to offer you our usual breakfast buffet at the moment, but we do not want to withhold the most important meal of the day. That’s why we serve you this in our breakfast room in compliance with the rules of distance. You can be assured that we will do everything to make your stay in our hotel as pleasant and safe as possible. In order for this to succeed, we ask for your personal support by keeping the required safety distance and making regular use of our disinfection offers, especially in public areas.